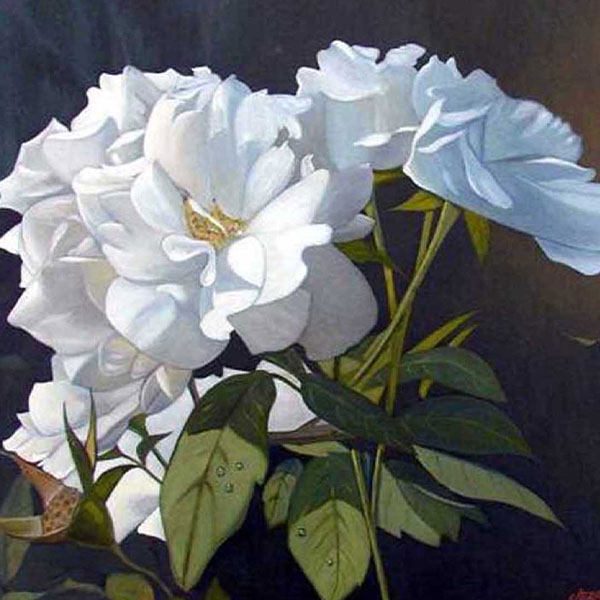 Jerry's current interests include not only the Mid-Atlantic Region but places and things from all over the United States, including landscapes, seascapes, portraits, florals, and still life. He works both in oils and watercolors. Jerry has recently renewed his interest in classical oil painting.

Classically trained and a professional illustrator, with over forty years’ experience, Jerry Gadd is internationally recognized for his artwork.

After studying in Baltimore at the Le Millet School and the Maryland Institute, Gadd worked with nationally known watercolorists Claude Croney and John Pellew. While Croney and Pellew were known for representational approaches to watercolors, Gadd’s work in oils reflects those approaches and represents both genres of art.

Gadd’s work focuses on the Mid Atlantic, and The United States, as his inspiration comes from historic sites in Carroll County and Pennsylvania. His paintings include seascapes, florals, portraits and still lifes, inspired by his travels throughout the U.S.

Gadd has participated in Maryland State and Federal duck stamp competitions, winning awards for decoy carving and photography events. An article and painting of Gadd’s was published in International Artist Magazine, and he was a finalist in their monthly competition. He recently had work published in the September and October issues of Southwest Artist magazine. In September, 2016 under the Emerging Artist section, and in October 2016 under the Artist to Collect Section. 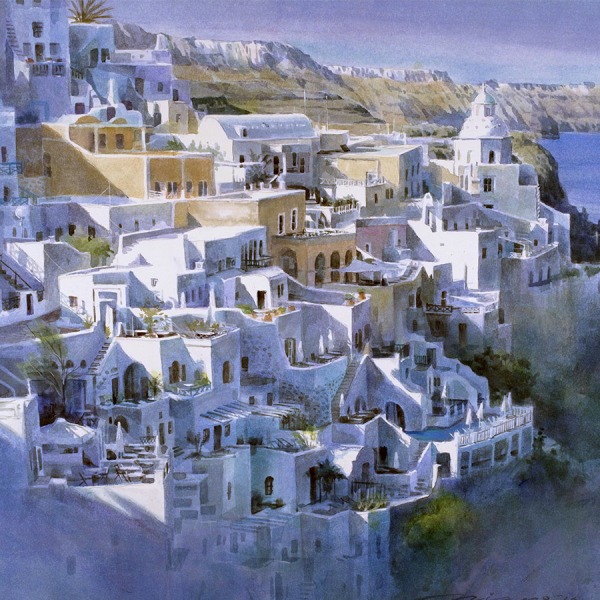 Misure Nien has been painting in watercolor for over 30 years, and after working as an art teacher he decided to focus on his love for watercolor and teaching at his studio since 2000.

I like to paint landscapes and beautiful things. I took two weeks' holiday in Santorini, Greece. I lived at the villa of north Fira that has a good view field. I enjoy quiet trance alone and feel white mix blue value in the soft light of morning. The sunlight from warming tone to brightness across the building gradually transform the angle and blue hue value also changed. This is an amazing and comfortable feeling of nature.

I like watercolor to create, watercolor's translucence is uniquely suited to paint water. Just as with water, watercolor captures the light. With careful observation, watercolor can also capture the shimmer or calm reflection of water as well as, if not better than, any other medium. Especially with a focus on capturing the light and shadow for dramatic effects very easily.

I started to like graffiti when I was young. Graffiti can satisfy my imagination because reality is often far away. Gradually, I discovered that drawing is a joyful thing, rather than a way of describing it in words, and you can share your own thoughts or emotions through each person's visual feelings. Therefore, art has become a kind of spiritual support and balance most loved in my life.

If the viewers can feel the beauty of the paintings, they will be affected to take action. It's like deciding to give yourself a holiday to the place in the picture to relax which I think is good art.

I think an artist should act as a messenger who conveys beauty and loves peace.

Describe your work in 3 words: Landscape is everywhere

"Lines and strokes by pencil or brush produce form, space, motion.
They give clear significance by strength and colour and also by letting blank the paper. Every stimulation comes from outside. As an answer to it my drawing and painting create the world outside new."

Looking around I always see landscapes (because there does not exist no landscape). Again and again I am fascinated and that's the beginning of a new work. I create lines and colours in order to work out all - for me - most important characteristics, till the moment the picture "tells" me: enough, well done or failed. Sometimes it seems more difficult to end working on a picture than to begin with it. There is nearly no possibility to correct the result of painting or/and drawing.

Working as an artist is a matter of dealing with the world around me. I have to find my position and - possibly - get echo. In my work I reduce nature to landscape. So it becomes concrete - maybe harmless - and a place of desire where emotion and thoughts may find a place to stay a while. My works show my highly personal view of a landscape - always without contradiction: nature never replies.

Art is good or it is not art. Producing art and also "consuming" art is a very individual process and that is OK in my opinion. It is probably the last important and completely free area for human beings to decide whether art is art or not. What makes a piece of art great for a certain person depends on his/her individual touchability and sensitivity. Apart from this: persons who have a high interest in art mostly make the same decisions regarding art.

It is very simple: I am an artist because there is nothing that interests me permanently so much as fine art. The role of - any kind of - artists was and is: to take a very personal look at the world to show (express) this access to the world using his/her medium and offer others to share it. But necessarily without any force or compulsion - art is free! There is a general right of interest and also of no interest.

“Feel through color and composition with an authentic sensitive language between. “Be" and not "be" from an abstract work of art to a realistic one without losing sight of Beauty.”

Mexican Artist, Anabel Mayorga Ayala has a clear love for painting. She has taken classes in various institutions and workshops and has participated in a variety of watercolor salons, through which she has also been selected for exhibition in museums as well as Honorable Mention awards of national range. Anabel showed interest in painting from a young age, actively producing work and experimenting to create her personal style. This passion fills her soul and continues to grow, develop and leave a mark in her path.

In 2012 she participated in the New York exhibit, “The Soul of Mexico” at Gateway Art center including renowned painters like Toledo Jazzamo. In 2017 she exhibited in “Thoughts of Water” selected through the International Watercolor Contest IWS. In 2018, she held her first solo show at the MUCIC Museum of the city of Cuernavaca entitled Síntesis y Silencio.

Anabel holds a degree  in Communication and Public Relations from Universidad Latinoamericana.

Born 1983, in Poland, Mikołaj Włodarczyk now lives and works in Columbus, Ohio, USA. After completing a Master's Degree in Philosophy, Mikołaj worked various jobs; from carpenter to goldsmith to graphic designer until 2009 when he became a tattoo artist. Now he works as a full-time tattoo artist by day and as illustrator and graphic designer by night.

"In my work, I'm trying to combine and implement experience from different art fields. I experiment with different materials and techniques in order to achieve an interesting effect and later I translate this form to tattoos. I spend several years in Belgium and Spain tattooing and making art. For the past two years, I'm working on Belgium style BD with a seriously sarcastic philosophically-existential background.  In 2018, I  moved to the USA. Now I live in Columbus Ohio and I got involved with the Evolved Body Art tattoo and piercing studio."

"My art is all about untapped beauty. I love color and enjoy painting realistically creating a sense of drama."

"Art is when you hear a knocking on your soul, and you answer."

Lori Pitten Jenkins lives in Melbourne, Florida, USA and is an avid runner, running in over 100 races including 2 marathons and over 20 half marathons. She performed with the Florida State University Flying High Circus from 1979 to 1983 with several acts including the Flying Trapeze.

Lori earned a Bachelor of Arts in Studio Art (1983) from Florida State University. In 2005 she revisited art by taking a watercolor class at a local museum and began entering shows in 2008. She is a member of Fifth Avenue Art Gallery in Melbourne, FL and participates in about 15 outdoor shows within the state of Florida per year, including prestigious venues like Gasparilla, Winter Park, and Mainsail. With an increasing number of collectors her unique and masterful watercolors never fail to impress. Lori continues to paint every day.

American Artist, Glenn W Davis is a graduate of New England School of Art & Design at Suffolk University. He is the recipient of a 1995 Massachusetts Cultural Council grant. He has been making art of one kind or another for over twenty-five years. He has dabbled in oils, acrylics, pen and ink, pastels, and graphite. Glenn focuses on watercolor for much of his recent work. He also teaches watercolor painting, pastels and drawing in various adult education centers and museums in and around the Cambridge and Boston vicinities.

"I know a great deal about unrest. White paper makes me uneasy. I like it raw and far from picturesque and have put on some marks to guide the painting. Often I get surprised. In fact always. Then I’m happy for a while. Style? Don't know. What it's about? Can't say – because then everybody knows."

Stig-Ove Sivertsen lives and works in Mosjöen, Northern Norway, and has over the years participated in many exhibitions in Norway and abroad. A self-taught artist, he works mainly with watercolor as well as acrylic and photography. A member of NFUK (Norwegian Association of Independent Artists), he maintains a personal gallery, Galleri SOS and has exhibited at Atelier Valva, Vefsn Museum and The Swedish Loft in Norway as well as The 66th Northern Norwegian Art Exhibition 2012 and Mid-Nordic Art Festival. Sivertsen’s works reflect a freedom and passion with which he seems to approach his medium. Skillfully executed these watercolors reveal the artist’s unique visual perspective and a strong ability to control the brush but also disclose a surrendering to the medium, letting the brush, the color and the water guide the creation of each unique field of the composition.

"The fluidity of watercolor, the essence of the material itself states this continual change of nature and as a result the ephemerality of the cycle of life.”

Greek painter, Spyros Kolyvas was born in Corfu and studied Painting at the Athens School of Fine Arts in the 1st Painting Workshop. In the academic year 1997-98, he received a scholarship and a grant from the State Scholarship Foundation Ι.Κ.Υ. He is a Member of the Greek Chamber of Visual Arts with work found in public and private collections in Greece and abroad. Kolyvas has had four solo exhibitions and participated in over 100 group exhibitions in Greece and abroad.

"I am very moved by the subjects I paint. My paintings are an attempt to crystallize a moment in time -- memories which perhaps remind us of special moments in our lives."

American artist, Arlene Cornell has had major exhibits in galleries in NYC (NY), Toronto (CAN), Spring Lake (NJ) and Rhinebeck (NY) with paintings in numerous collections through the USA and internationally. A self-taught watercolorist, Cornell is a member of the Catharine Lorillard Wolfe Art Club and the Brooklyn Watercolor Society. She has won numerous awards in juried art exhibitions.