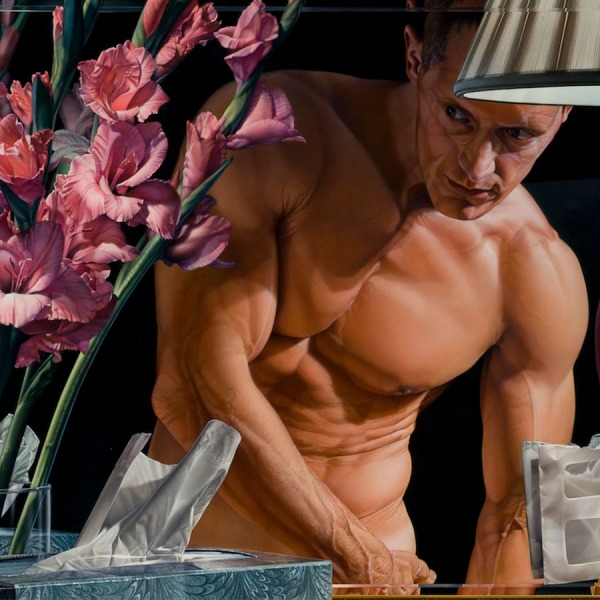 "My strategy is to employ beauty as a subversive instrument of seduction, a peacefully sensual way of drawing the viewer into a space that challenges heteronormative assumptions of male competition, and which demonstrates that same-sex relationships are wholesome, healthy and life-affirming."

Gerard Huber was born October 2, 1949, in Waterloo, Iowa. He graduated from the University of Northern Iowa with a Bachelor of Arts degree in Painting and Printmaking, 1971. Following completion of undergraduate studies, Huber studied Figure Drawing and Contemporary Theology at the University of Notre Dame, 1971, and participated in the Blossom-Kent Art Program at Kent State University, 1973. Huber earned a Master of Fine Arts degree in Painting and Drawing from Cranbrook Academy of Art, 1975, studying with George Ortman.

In 1994 Huber received a Mid-America Arts Alliance/National Endowment for the Arts Fellowship in Painting. He has been a Resident Fellow at The Vermont Studio Center, Johnson, Vermont (2008); twice at the Virginia Center for the Creative Arts, Lynchburg, Virginia (1987, 1988); and once at the Cummington Community of Art, Cummington, Massachusetts (1988). Huber has been a Visiting Artist/Visiting Scholar at the American Academy in Rome, Rome, Italy, 2013 and 2015.

Huber’s airbrushed acrylic paintings have been exhibited in more than 60 exhibitions including the Joslyn Museum of Art, Omaha, Nebraska; the Arnot Art Museum, Elmira, NY; Parsons School of Design, New York, NY; Salmagundi Club, New York, NY; the Arkansas Art Center, Little Rock, Arkansas; and many others. His paintings are represented by the Lizardi/Harp Gallery in Los Angeles, California.

“Gorgeously painted voluptuous male figures are the protagonists in Gerard Huber's mesmerizing compositions. Perfectly rendered in a classical style the works bring Grecian ideals of beauty into a contemporary context.

In "Reflection I" Huber's own David is depicted among a variety of symbolic motifs cunningly placed to make it impossible for the viewer to evade the narrative.

Often literally in conversation with ancient Greek and Roman sculptures, the nude characters display a tenderness that comes in contrast with taboo expectations and stereotypic assumptions surrounding what it means to be a strong man. The brawny figures with every muscle and vain painted in exhaustive detail come to contrast with their gentle gestures and tranquil poses. These complex characters manage to exude power from their vulnerability as they seem comfortable and resolved with the combination of strength, power, softness, and emotionality they simultaneously represent.

What is significant in Huber's work is not his extraordinary capacity for realism but more importantly his ability to think and create in a post-modern context where the pieces become mesmerizing for the multiplicity and complexity of the content they evoke whether that is a conversation on art itself, on sexuality or the strong man etiquette.”

- Circle Foundation for the Arts, Director