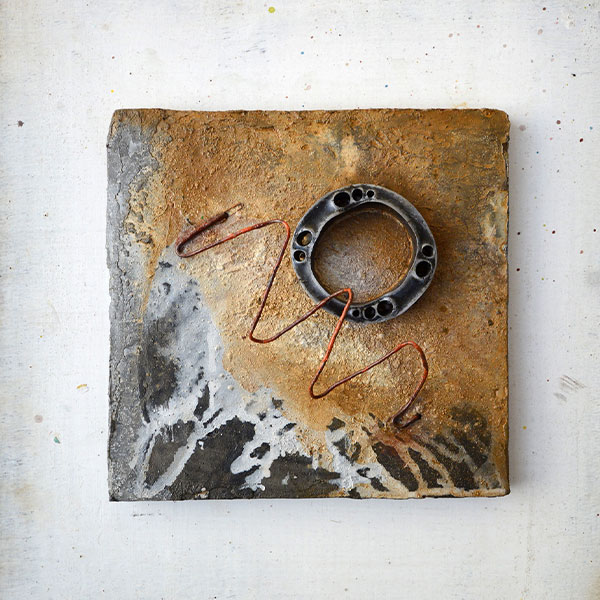 "I like the nice feeling of discovering pleasing forms in the seemingly worthless, used, from everyday life and nature in order to explore a possible artistic use in advance. It is important: natural patina - the protective layer to counter the transitory - helps me to create my works."

Weber worked freelance as a digital and photo artist, draftsman, illustrator, interior designer, designer (1992-2012) and has been working as an independent artist since 2011. Today he lives and works in Neu-Anspach, Germany.

Patina Assamblagen - The protective layer to counter the transitory

"Some things protect themselves like plants plant their fruits with a layer of skin (onion) or tree bark. Even metals get a protective layer of rust and patina. The aesthetics of the resulting colors, textures and structures of the surfaces inspire me to create my patina assemblages.

For the composition, I take found formal aesthetics from the everyday. The nice feeling of discovering pleasing forms in the seemingly worthless (throw-away items, etc.), exploring a possible artistic use in advance.

The line plays an original role in this. It consists of an infinite number of points, divides and delimits surfaces and shapes as a simple element. The resulting structural architecture has to be studied, recorded and integrated into the composition.

Trusting in revealing a natural canon of forms and choosing exciting sections with my inner eye, I draw, paint, create and clock my assemblages with everything that is available to me artistically.

"Not everything we throw away is useless, not everything we consider worth is valuable. With artistic means and aesthetics, I create attention and awareness for the apparently self-evident things of our life. Especially used or used - if only one thing - can tell us a lot about it itself or the people who breathed life into it, used it. Resources are not available indefinitely. We draw a lot from nature, use and transform it, create new products that we can only."