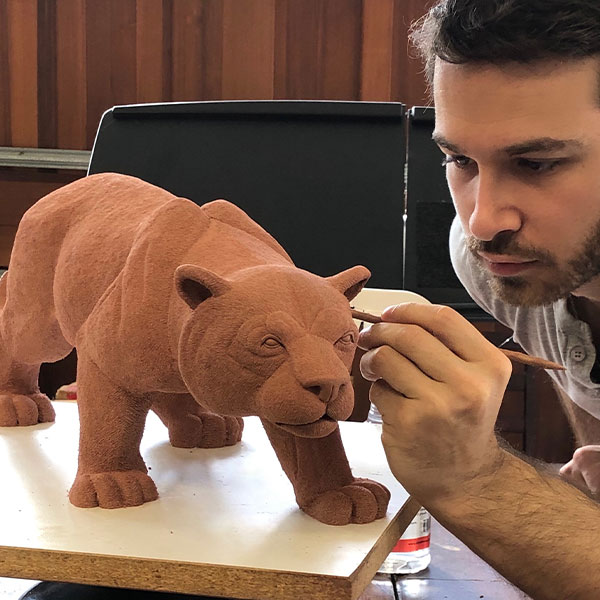 "I strive to replicate the actual subject. Utilizing micro-detail encourages a more intimate, close-up interaction. I want my viewers to feel like they experienced a face-to-face encounter with the actual animal."

Growing up in Connecticut as a gifted athlete, most people knew about Jesse Nusbaum’s athletic prowess but not his artistic talents. Nusbaum was an All-State baseball player and recruited by many colleges to play baseball. He attended Muhlenberg College as a political science major, intending to become a lawyer, but after briefly attending law school, chose to pursue his passion as an artist. He received a B.A. in Fine Art's from Muhlenberg in 2013.

At just 30 years of age, Mr. Nusbaum has received multiple awards and accolades for his art, specializing in sculpting bronze animals. In 2017, he was selected as one of the youngest artists inducted into the Silvermine Guild of Artists. In 2019, he was selected as a member of the Connecticut Academy of Fine Arts. He has been featured in Contemporary Art Curator Magazine’s "100 Artists of the Future," World Wide Art Books’ "Important World Artists", and "International Contemporary Masters." At the age of 28, he was nominated by Connecticut Magazine’s Top 40 Under 40, which recognizes 40 high achievers under 40 years of age in multiple walks of life—from professional athletes, politicians, writers, and others who have made their mark in the State of Connecticut.

Nusbaum has been showcased three times at Art Basel in Miami. In 2018, his work was on display at the prestigious Red Dot Miami venue at Art Basel, where he and his gallery, Zenith Art and Fashion, were honored with multiple awards.

Notably, two of Mr. Nusbaum’s Husky busts (the mascot of the University of Connecticut) were presented to the Women’s Head Coach and the Men’s Head Coach in 2014, in honor of their twin national basketball championships.

Nusbaum has sold many of his sculptures to private collectors in the United States and internationally.