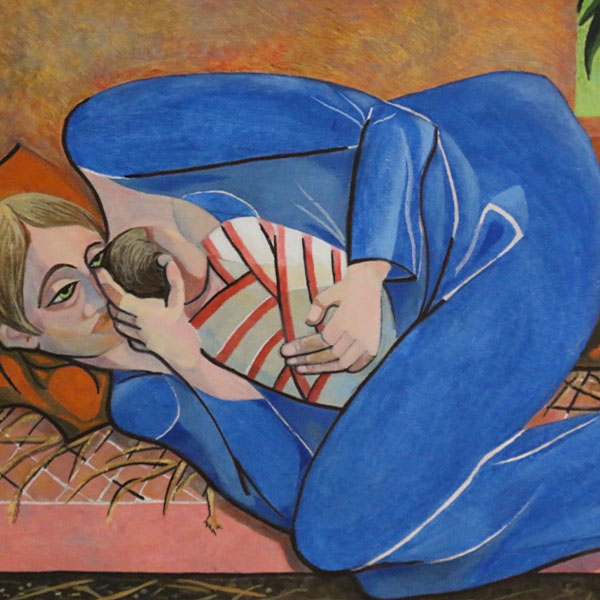 "I like to draw. All my ideas have a strong graphic base. They often start as simple, quick single line graphic notes that emphasized key shapes. Shapes and the rhythms between them have always fascinated me. On canvas they redefine themselves so I get an interaction between design and serendipity."

"I think I must have been painting and drawing all my life. I remember daubing the wall by my cot one afternoon to my mother’s chagrin. There were painters in her family in Belgium and I was encouraged to emulate them, so I was forgiven. One of my earliest memories is of winning an art prize at Clergy High School in Khartoum before my 9th birthday when I was sent back to England to be tamed. I painted at school and exhibited with one-man shows before I went to University. My first one-man show was at The New Stanley Art Gallery in Nairobi where we lived and was reviewed in the East African Standard. This was followed when I was allegedly studying Modern Languages. with shows In Studio Callebert in Roeselare, and Gallerie Brittanique in Ieper as well as at the Heffers Gallery in Cambridge and my college, Trinity Hall. I also exhibited with the Cambridge Footlights at the Edinburgh Festival. I changed course after my Part 1 to Architecture, where I met my wife. We married on graduation day. So I became an architect for many years, thinking I could paint in my spare time and in the meantime the bills would be paid. Instead, it consumed all my creative energy, so painting was put aside except for once every few years.

Architecture is a team sport, relying on many others to develop a design and then build it, whereas painting just relies on the dialogue between the image and the artist, with the pleasure of immediate results. After designing large hospitals in the UK and abroad as a career, I have now returned to painting and drawing full time. and I have exhibited at the Russell Gallery and Brick Lane Gallery in London, Barbers Gallery in Woking and the Guildford House Gallery in Guildford. I show with the Guildford Art Society and at AppArt in Godalming."